My husband works for an awesome company.  He was chosen, along with several other co-workers, to receive a trip for two to Maui, Hawaii.  How amazing is that?

They flew us out, put us up in a fancy resort, planned a couple activities, and gave us a gift card to cover some of our expenses while we were visiting the island.

We actually left Thor home with his grandparents for the week.  That was a little hard on me, since I’ve only been away from him overnight a couple times.  But it was really nice to take some time just the two of us.   Unfortunately it was rainy and cloudy almost every day that we were there.

Let’s get to the pictures shall we?  But before we do that I want to let you know that all of these pictures were shot in manual mode. What?!  I know!  And Ricky is learning it too.  We had a great time learning how to use the camera.

This is the view from our room. 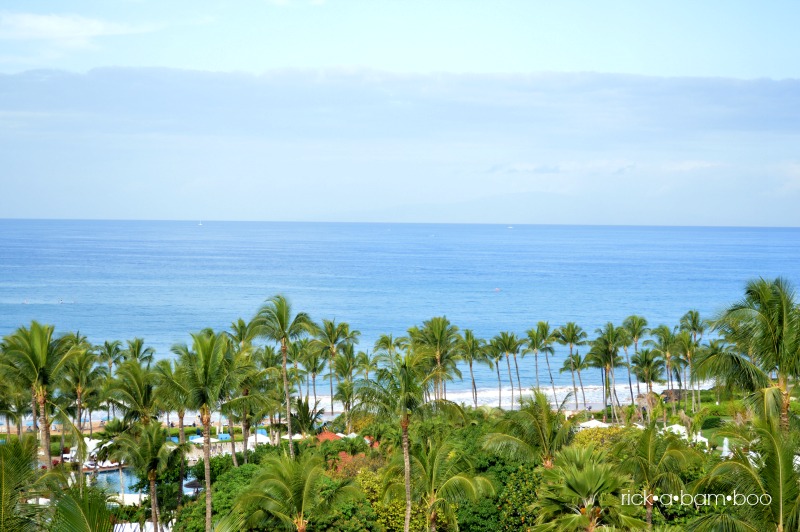 It was so pretty.  AND it is whale season.  So all the humpback whales are in Hawaii.  We could see them from our balcony!  I mean, they were super tiny and far away, but we could still see them.  So cool!

Here are some pictures from around the resort.  We were staying at the Grand Wailea. 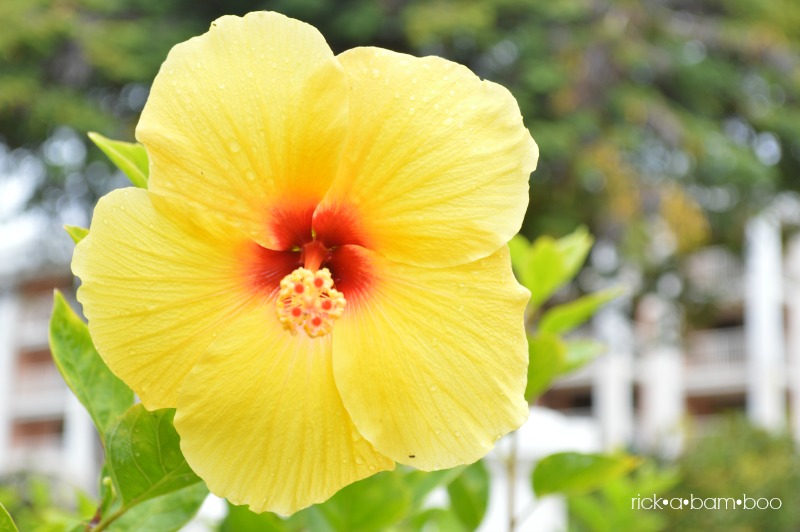 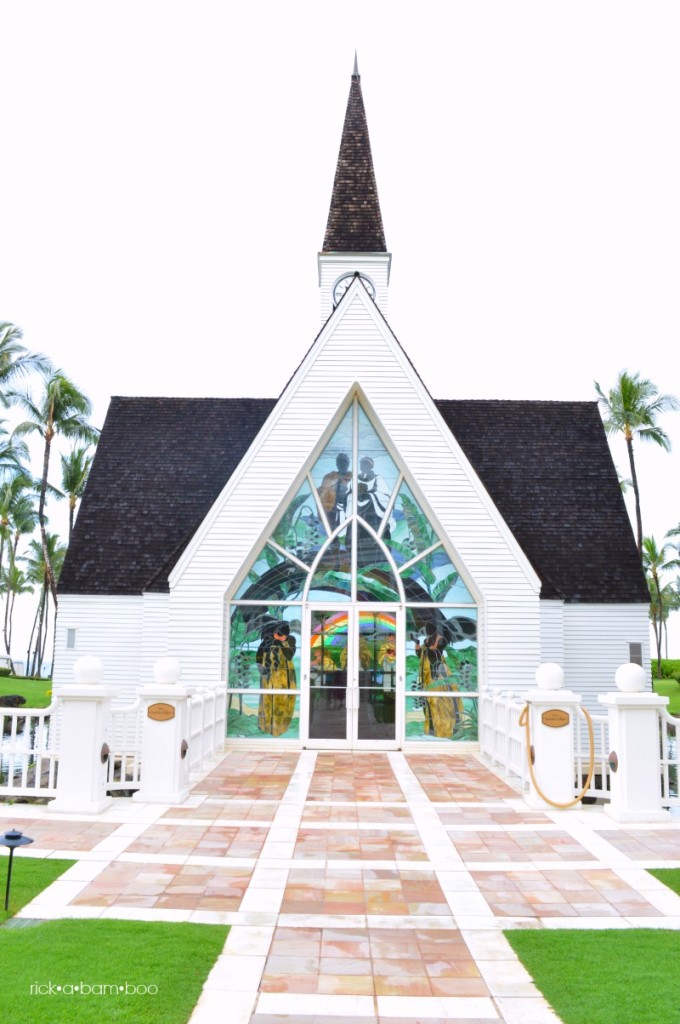 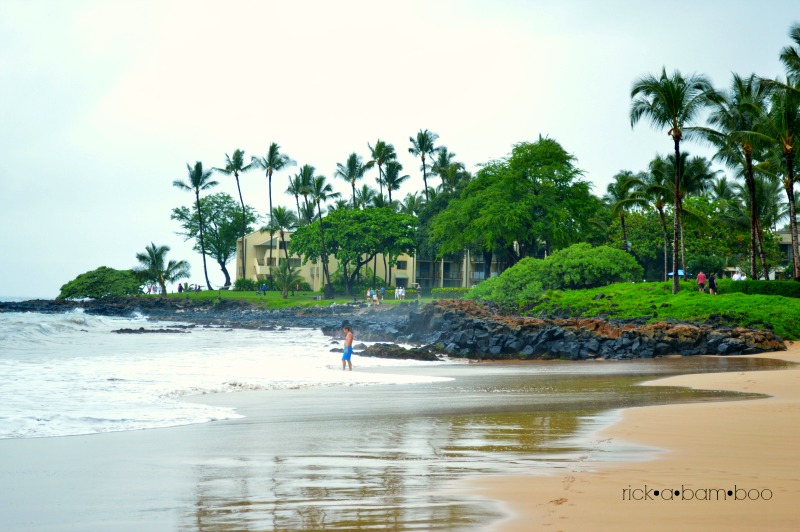 The resort had a restaurant called Humuhumunukunukuapua’a.  However we weren’t able to eat there.  They had a dress code.  No flip flops and not shorts.  I had only brought flip flops and Ricky only had shorts.  Oh well.

Ricky  was also impressed that I could say the name.  For those who need a little help, it’s:  who-moo-who-moo-new-koo-new-koo-aw-poo-aw-aw. 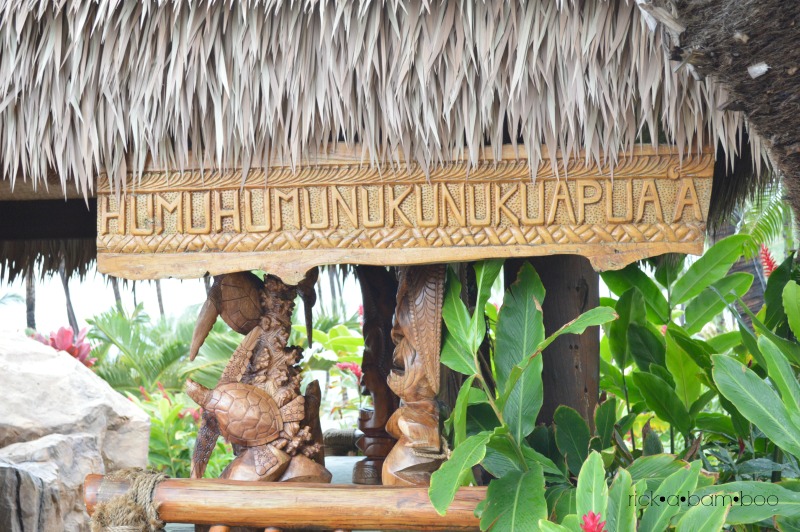 They also had the biggest koi that I have ever seen. 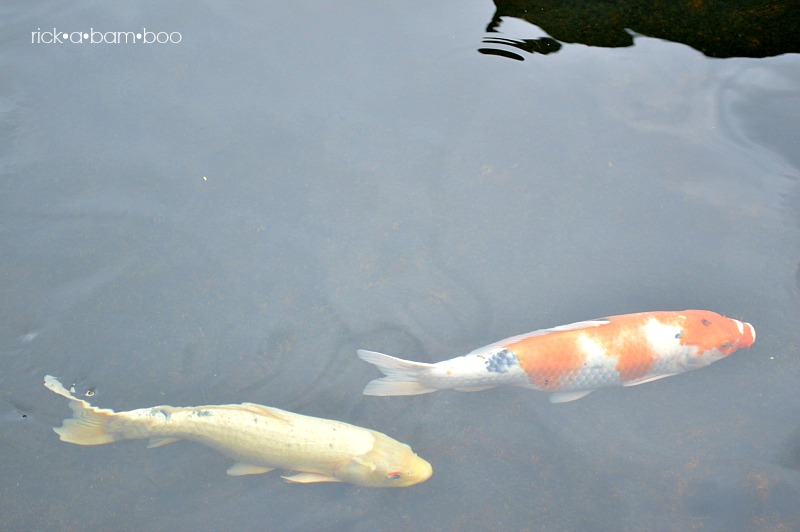 We went to the north shore of the island one day to see the waves and eat at Mama’s Fish House.  If you get the chance to go there, it’s delicious!  It’s the more expensive meal Ricky and I have eaten together, but it was SO good.  I had crab stuffed Mahi Mahi that was encrusted in macadamia nuts.  Mmmm!

Outside of Mama’s Fish House the walkway was made up of gecko pavers.  How cool?  Reminds me of a puzzle my parents had when I was a kid.  You can buy a mold to make your own pavers.  Now if I just had a place that needed a gecko patio… 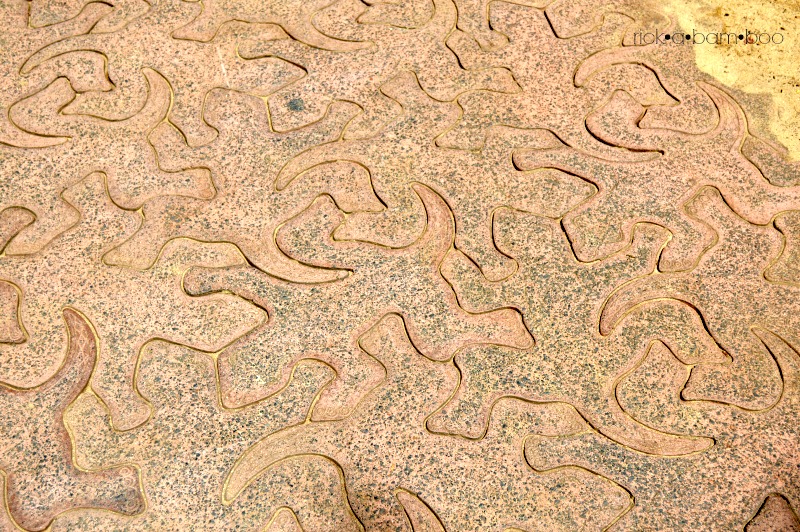 Check out these waves. 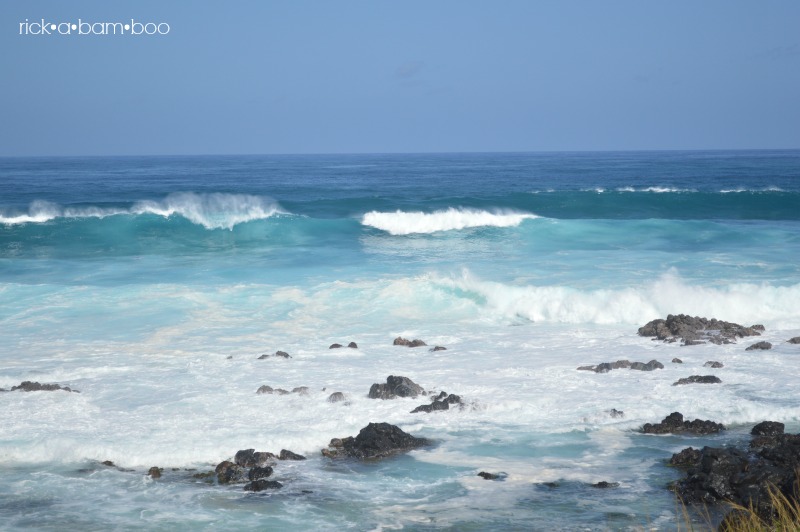 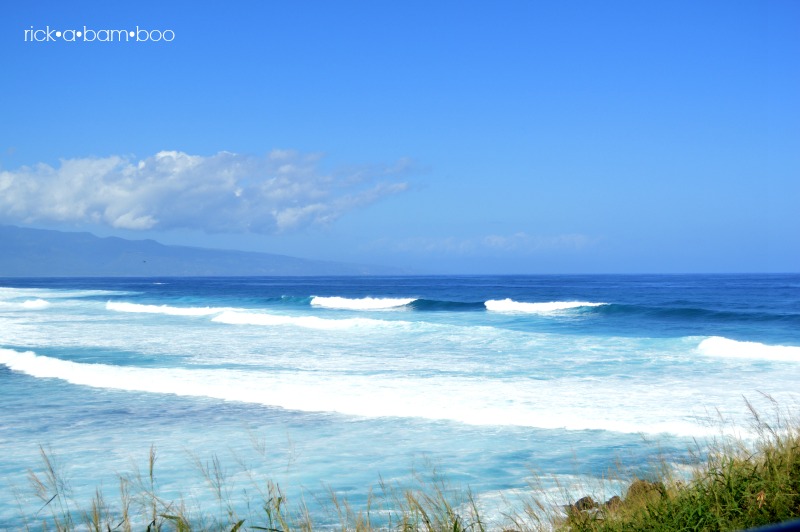 Then we went to a bamboo forest to hike some waterfalls.  I know.  It’s not my thing either.  But Ricky wanted to, so we did.  If it happens to be your thing, it’s just after mile marker 6 on the road to Hana.  It’s the side of the road with all the bamboo.  The other side has a gate and grass and no bamboo. 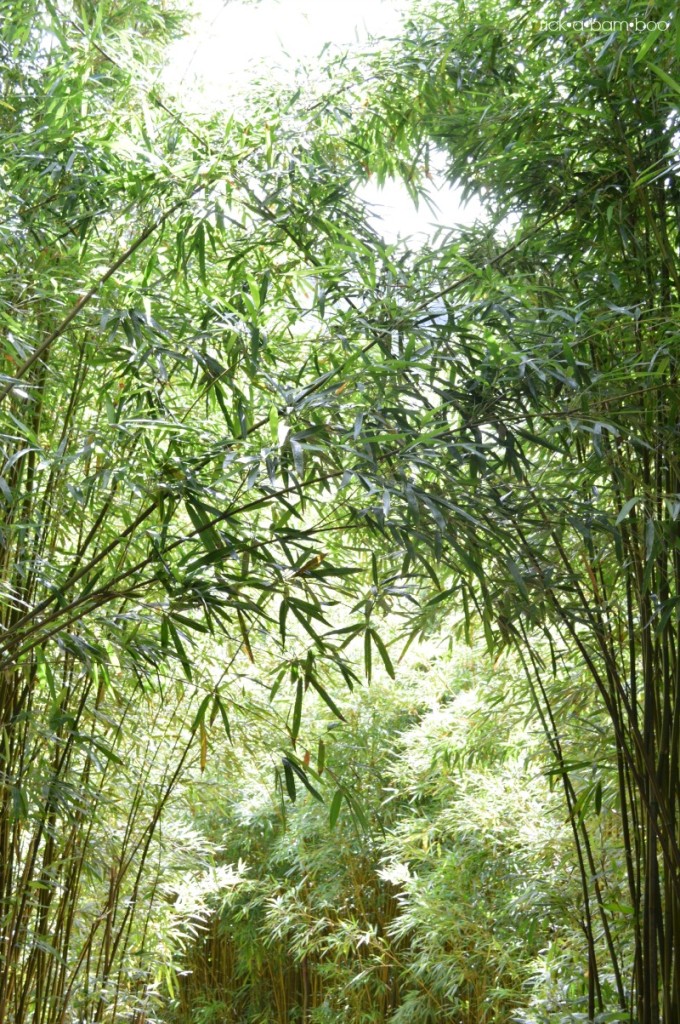 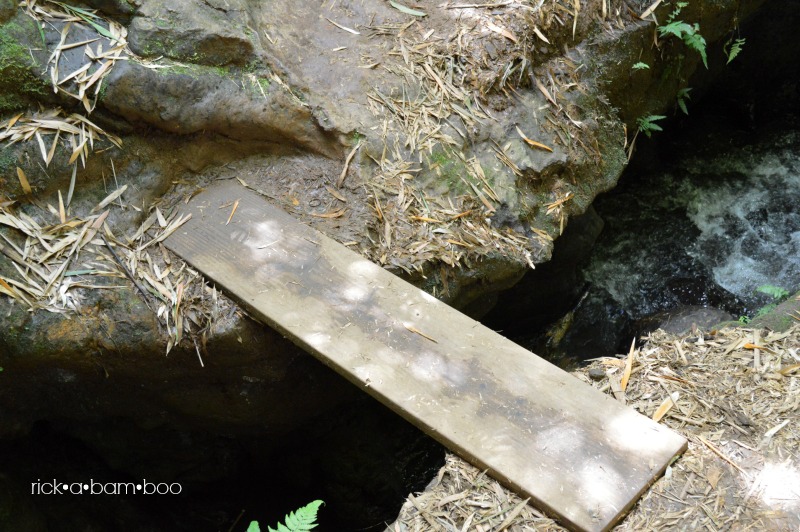 See that little board? Yeah, we walked across it.  Adventurous huh?  There was also a really steep hill that we climbed with the assistance of a rope and a ladder that I attempted to climb but decided I was too scared so we stopped at waterfall #2.  There are four total if you keep going.  Wear your swimsuit, as you have to swim to the last one. 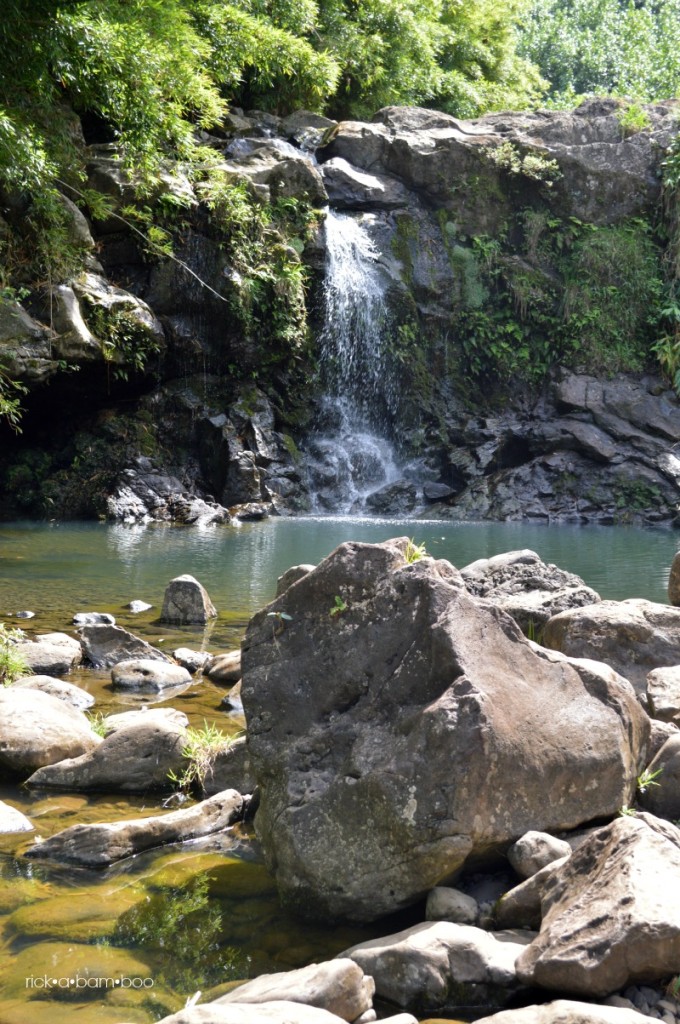 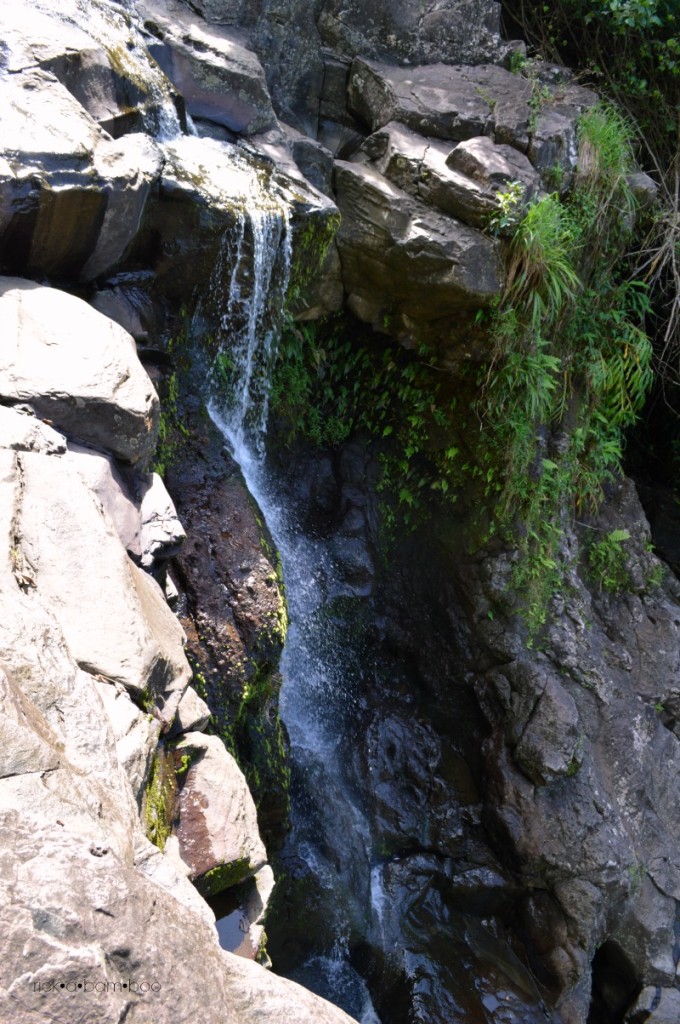 « Creating Printables
Behind the Scenes »