When I was pregnant with Thor I read that cloth diapers make excellent burp cloths.  So I ordered some.  Turns out I didn’t know anything about cloth diapers.  Because when they arrived they were the thinnest things I had ever seen.  How were these supposed to be super absorbent for all that baby spit?  They looked like gauze.  They were practically see through.  The weave did tighten up after a few washes, but they were never the amazing things that I had read they were.   Which was a shame because Thor was a super spitty baby. 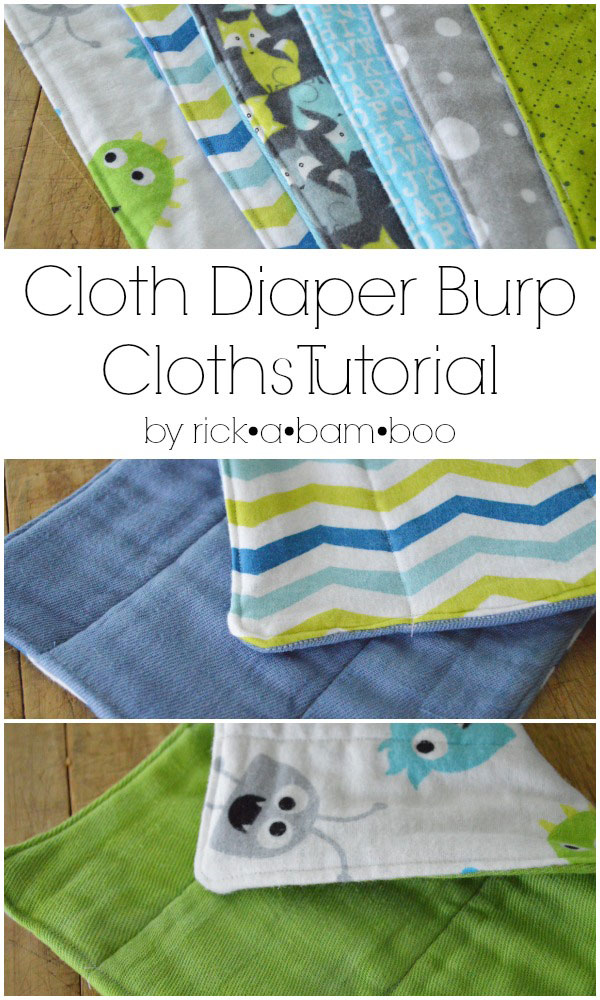 So this time around I did a little more research.  I looked on Pinterest to see what diapers other people had used.  I also noticed that people were adding fabric to their cloth diapers to make them prettier.  I liked the idea of that, but I thought that it would be better to use flannel as opposed to regular cotton.  Flannel is much softer.  And I thought it looked odd that people were basically using the fabric as a trim.  If I was going to add fabric I wanted the whole side covered.

(This post contains affiliate links. Thank you for supporting this blog.)

I decided to go with prefolds.  I found a great deal on Indian prefold seconds.  I got a dozen preemie diapers in neutral for $8.50 plus shipping.  So I ordered two dozen.  I thought I would make some for myself and some to give as gifts.

Since I had ordered preemie diapers I was able to purchase just 1/4 yard of each flannel pattern I chose.  Each pattern was wide enough to cover four diapers, so I needed six patterns to cover all 24 of my cloth diapers. 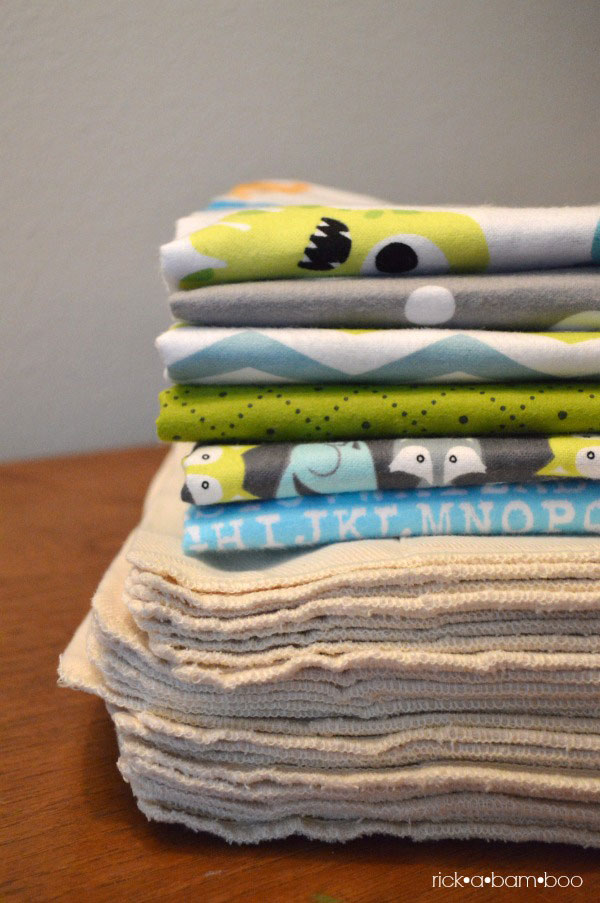 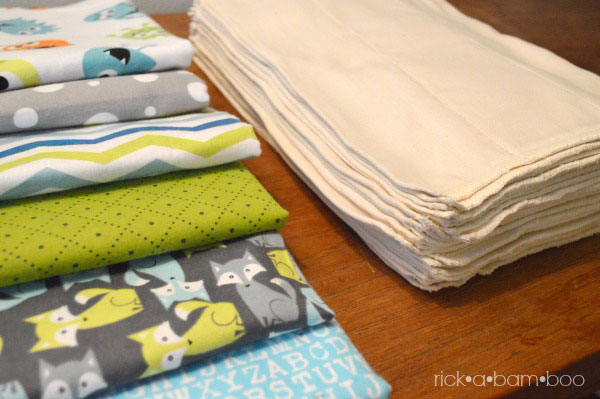 When they arrived I could tell that I had made a better choice this time.  They were already nice and thick right out of the package.  My only issue with them is that they were natural color.  I would have gotten the bleached seconds, but they only had bigger sizes of diapers left and they were more expensive.  But I decided natural would work.  I would just dye them.

I tossed them in to a prewash with the flannel that I had purchased to go with them.  When they came out of the dryer they were nice and squishy.  Just what I wanted!  Now that they were pre washed it was time to dye them. 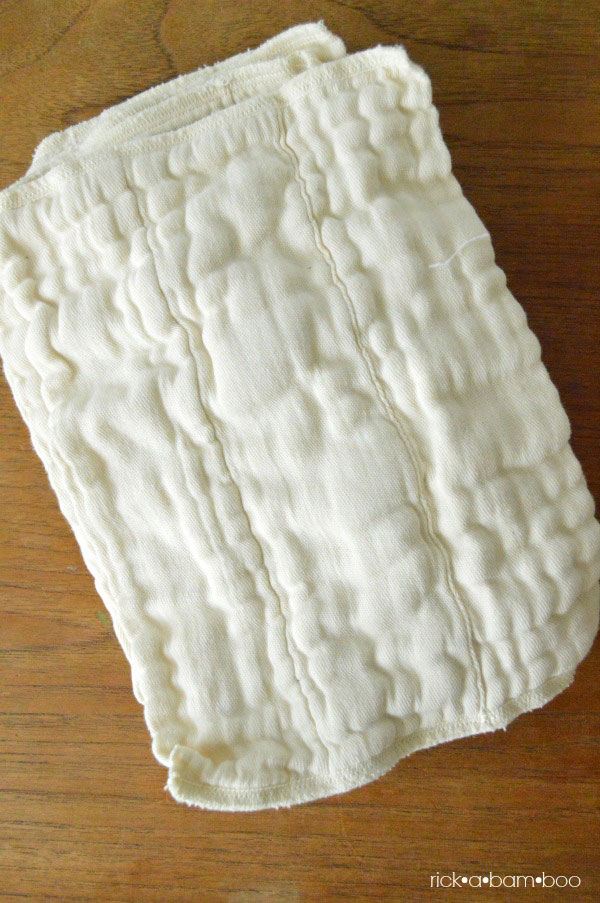 I had seen a chart of colors that you could make by mixing different Rit dyes, so I googled around to find it so I could choose the perfect colors to go with my flannel.  I chose Sodalite Blue (Blue #592), Pearl Grey,  Lemon-Lime (Green 3 #578), and Robin’s Egg (Blue-Green #576).  To create these shades I needed four bottles of Rit dye.  Royal Blue, Pearl Grey, Lemon Yellow, and Aquamarine.  The also give a calculation chart since the color swatches were made using a tiny square of fabric.  More than likely you will be dying more material than just a tiny square so you will need to adjust the amount of water and dye accordingly.

Since I chose four colors I did four dye batches with six diapers each.  I used a 16 qt bucket that I bought at Target to dye all the diapers in.  For each batch I put 1/4 cup of salt into the bucket.  Then I pour a gallon of hot water in the bucket and mixed until the salt was dissolved.  Rit recommends using salt on cotton for optimal color intensity.  Once the salt was dissolved I would add my dye and mix.  Here’s what I used for each of my batches:

Sodalite Blue – I added about 4 oz of Royal Blue to the water.  I just eyeballed what looked like half of the bottle.
Pearl Grey – Same thing.  I used about half the bottle of Pearl Grey. (Not pictured.)
Lemon-Lime – I added 16 tsp of Lemon Yellow, which is a little more than 5 T if you don’t want to count to 16.  Then I added 4 tsp of Aquamarine.
Robins Egg –  I added 9 tsp.  The recipe says 8, but I was zoning out and realized that I said 9 as I dumped the ninth teaspoon in.  Oh well. 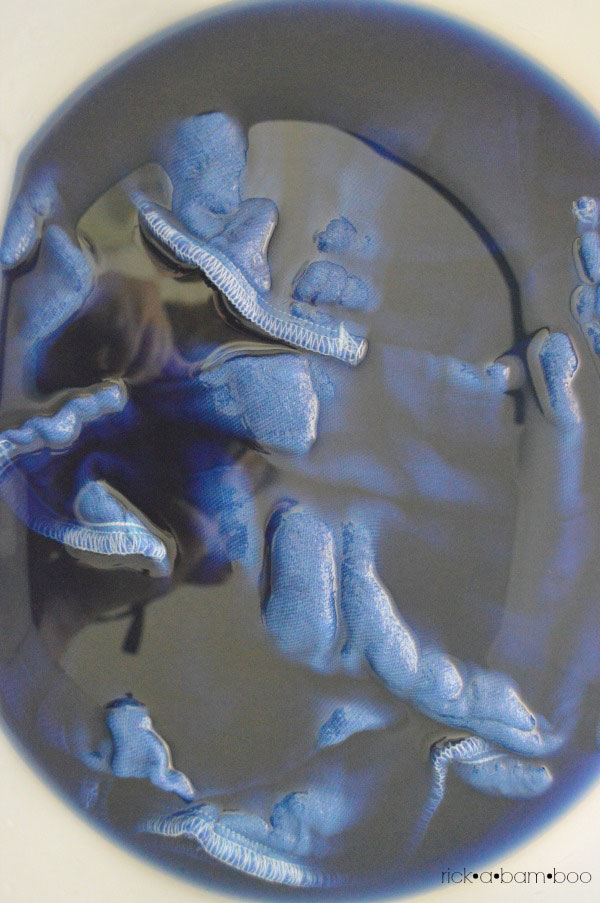 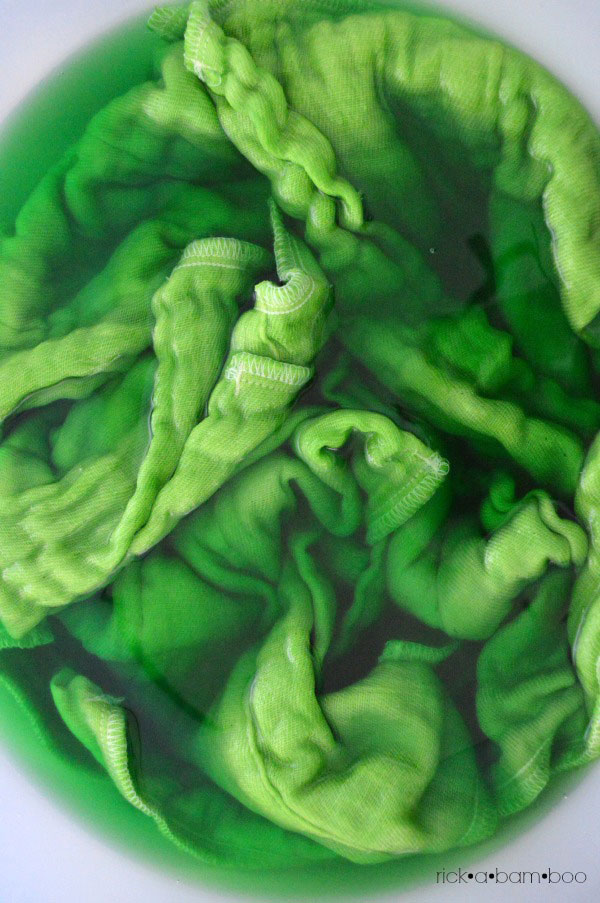 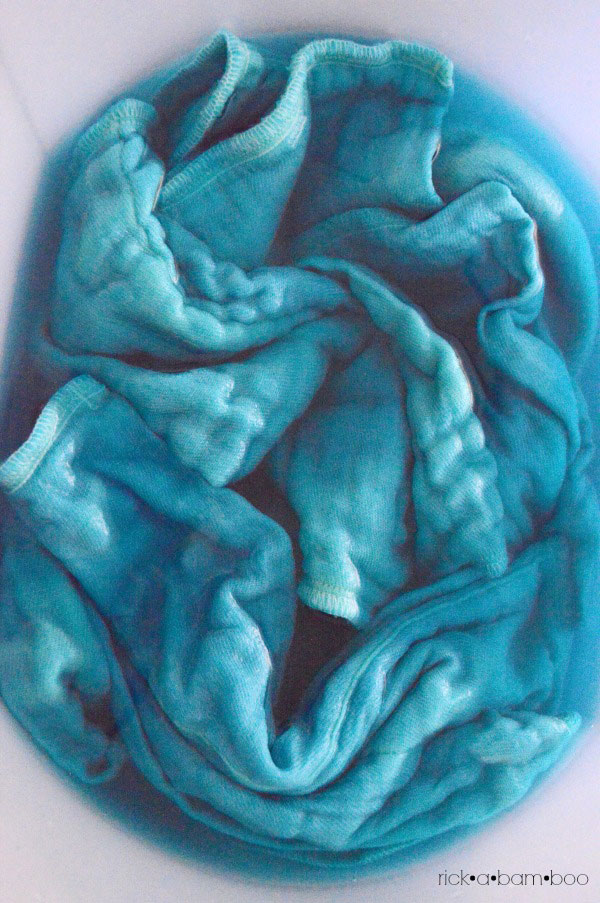 Then it was time to add the diapers.  I soaked them in warm water, rung them out, and repeated.  I wanted to make sure they were good and wet so that they didn’t soak up all of the color mixture and leave me with nothing but wet diapers in my bucket.  Plus it’s easier for the material to take the dye evenly if they are pre moistened.

I let each batch soak for an hour.  I had the bucket just sitting on my dining room table so I would walk by and stir it around every 10-15 minutes.  After the hour was up I dumped it all into my sink.  Then I rinsed out the diapers in water that was as warm as my hands could stand.  When the water rinsed out clear I would ring it out really good and set it aside.  I placed all my diapers out on my lawn to dry while I made the subsequent batches.   None of them were really dry when I went to gather them all up.  But that was fine because I was going to just throw them in the washer. 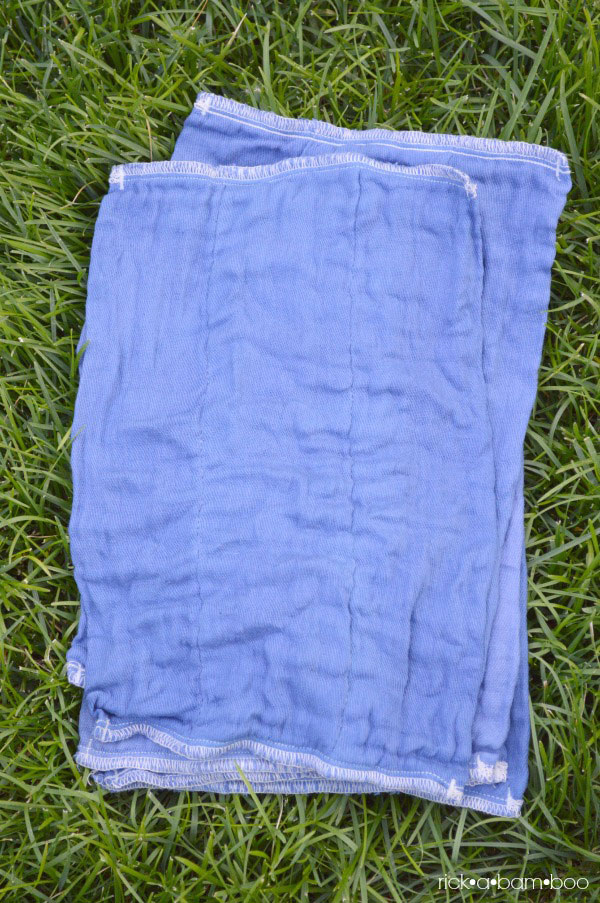 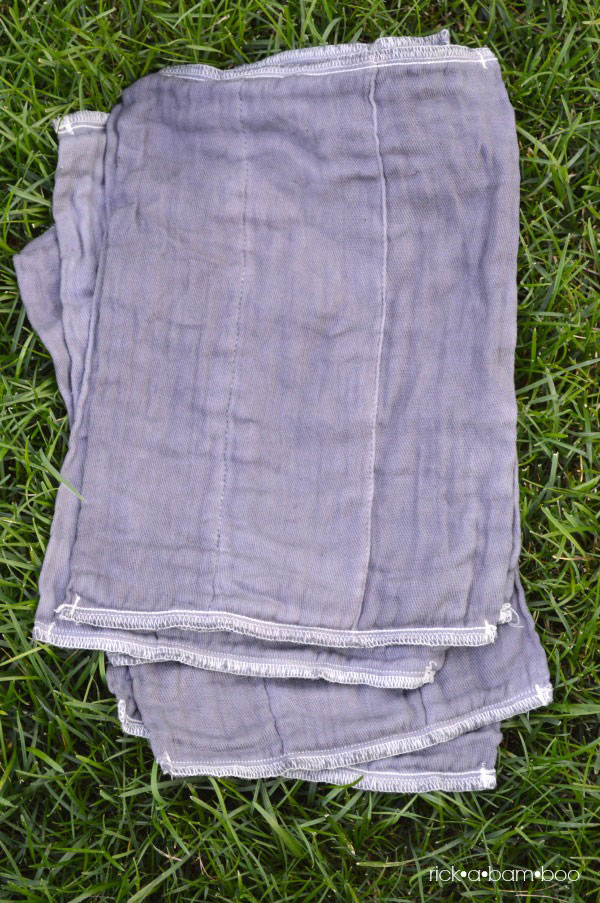 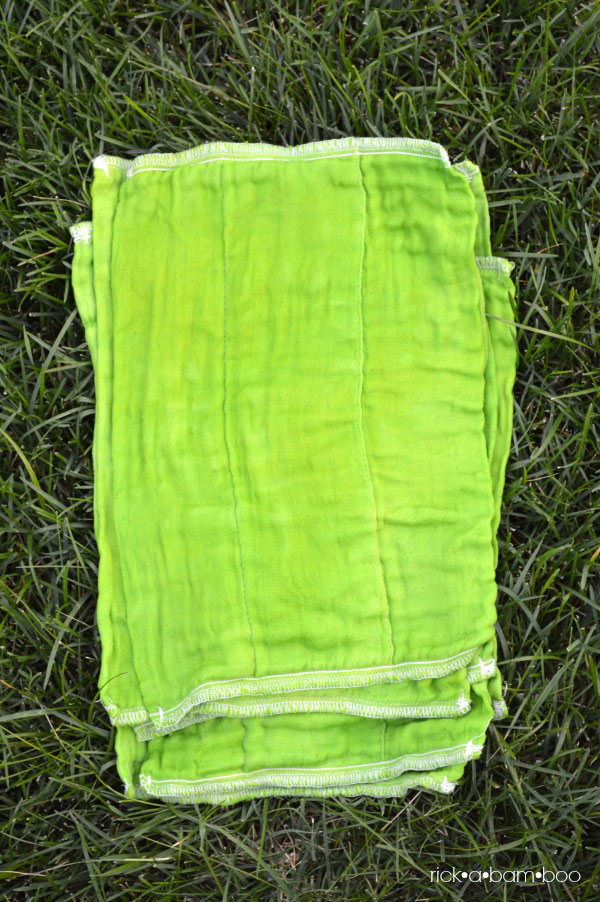 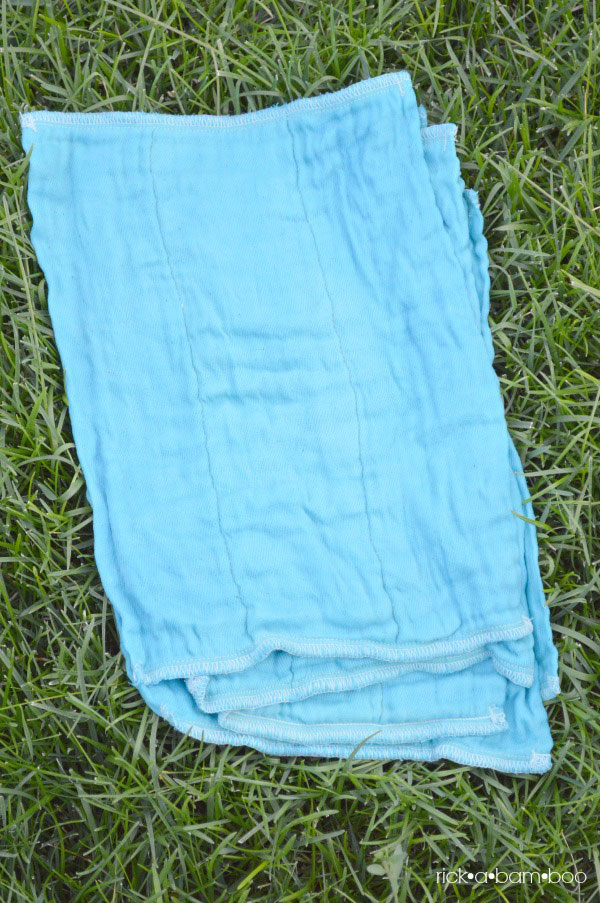 I put all of the diapers in the wash together.  Maybe that wasn’t the best idea since they could possibly bleed on to each other.  I figured that I had rinsed them really well and they were going to be washed together anyway.  So I tossed them all in the wash cycle with a scoop of my DIY laundry soap and about a 1/2 cup of vinegar.  I thought the vinegar might help keep them from bleeding on each other.  I set my machine to an extra wash and an extra rinse as well.

An hour later I got to hold my breath as I opened the door to the washer, hoping that they didn’t look all muddled.  And they didn’t.  Hooray!  And thank goodness.  Otherwise I just spend an entire afternoon on a muddy mess.

I ran them through the same double cycle again with more soap and vinegar.  Just for good measure.  Then I tossed them all in the dryer.  Once they were dry it was time to start adding the flannel.  Check out part 2 tomorrow for that tutorial.

But while you wait for part 2, you can enter win an Angel Care AC605 monitor.  I have an older model that I purchased when Thor was born.  I love these monitors.  They have a motion sensing pad that you put under the mattress.  It really puts a new mama’s mind at easy.  I actually turned the motion sensor on every night until he turned one.  Although some nights he would crawl to the corner of the crib and the alarm would go off.  That’ll give you a heart attack at 2 am.

If you make some I’d love to see them.  Share them via social media with the hashtag #ambersimmonsblog.

Enter using the rafflecopter below and one lucky winner will receive a brand new Angel Care AC605 monitor.
a Rafflecopter giveaway